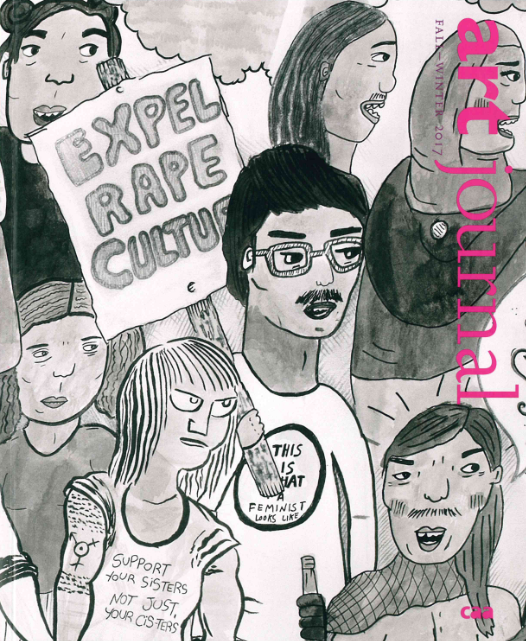 “Curating New Openings: Rethinking Diversity in the Gallery” is the centerpiece of the recently published Fall–Winter issue of Art Journal. The forum, organized by Amanda Cachia, highlights the experimental ideologies and methodologies of curators who root their projects in diversity in ways beyond conventional considerations of difference and access. It features texts by the curators Eliza Chandler, Anne Ellegood, Catherine Flood, Massimiliano Gioni, Naima J. Keith, Rhonda L. Meier, Helena Reckitt, Sara Reisman, Franklin Sirmans, and Cachia herself. The art historian Jonathan D. Katz contributes a polemical text on his dislike of the term “diversity.” The forum also showcases artworks by Firelai Báez, Fayen d’Evie, the collective Gender/Power, Christine Sun Kim, Nadia Myre, Alison O’Daniel, and Matt Smith. And for the first time in Art Journal, captions in the forum include image descriptions.

The afrotrope, the idea of recurrent forms in African and African diasporic visual cultures, is also a recurrent thread in Art Journal. In this issue, the originators of the concept, Huey Copeland and Krista Thompson, reintroduce the theme in a short “user’s guide.” An essay by Allison K. Young then traces the path of afrotrope images from documentary photographs of the 1976 Soweto uprising through artworks created outside South Africa in the following years, particularly in the screenprints of the UK-based artist Gavin Jantjes.

An essay by Tim Stott, a Dublin-based historian, explores the geometries, patterns, and diagrams of paintings, digital prints, and sculpture by Gabriel Orozco, in particular the knight’s move the artist has borrowed from chess.

#silence=violence, an artists’ project by Deirdre Logue and Allyson Mitchell with Heidi Cho and Morgan Sea, unfolds in the issue—quite literally, in a series of unfurling, densely illustrated pages. Responding to an invitation from the Doris McCarthy Art Gallery of the University of Toronto, the artists created the triptych of large-scale drawings, which then became the basis for murals at the university. Dozens of activist figures stream across the panels, addressing sexual violence and harassment on campuses with passion, resolution, and wit—even Siri puts in a cameo appearance.

The Reviews section opens with a critical bibliography on the theme of “possibility aesthetics” in the Anthropocene epoch by the artist Andrew Yang, who ponders eight publications—a graphic novel, a performative lecture, a manifesto, and more—as “opportunities for perceiving the complexity of planet-size facts.” The section continues with reviews of the exhibition and catalogue for A Feast of Astonishments: Charlotte Moorman and the Avant-Garde, 1960s–1980s (by Nicole L. Woods), the exhibition and catalogue for Lynn Hershman Leeson: Civic Radar (by Robert Slifkin), and the exhibition catalogue The Passion according to Carol Rama (by Jennifer Griffiths).