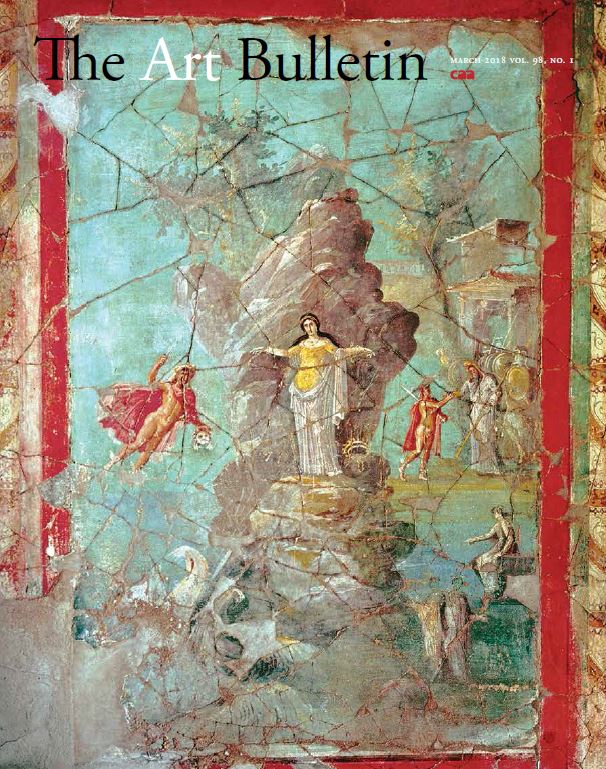 A spectacular fresco from early first-century Pompeii is featured on the cover of the March 2018 issue of The Art Bulletin. Drawing on a palette of aqua, yellow, and deep red, it depicts Perseus rescuing Andromeda from captivity on a rocky promontory. The fresco appears in Nathaniel B. Jones’s essay “Starting from Places: Continuous Narration and Discontinuous Perspectives in Roman Art,” which explores how the painters of the time represented multiple temporal moments in a single visual field.

Two essays also featured in the issue examine diverse medieval pilgrimage practices: Conrad Rudolph considers the visual tour guides used at European sites, notably Canterbury, and how they enhanced the social and public reception of works of art; Talia J. Andrei investigates the pilgrimage mandala paintings of Japan’s Ise shrines and the ways they allude to the power and authority of individual Buddhist temples. In the sixteenth-century miniature paintings that depict the ceremonial presentation of gifts from Safavid shahs to Ottoman sultans, Sinem A. Casale locates an unusual opportunity to assess the agency of gifts through their visual representation rather than their materiality. John Ott finds that Hale Woodruff’s six-panel mural of the early 1950s, The Art of the Negro, presents an inclusive, nonlinear visual history of global art that also destabilizes conventional narratives of the origins of modernism. The role of photography during the 1980s human-rights conflicts between the United States and Nicaragua is the subject of an essay by Erina Duganne, who focuses on postmodernist critique of photography as revealed in a 1984 exhibition intended to counter misrepresentations in the news media.

The reviews section, on the theme “Transatlantic,” features recent books on images and objects from the New World in Medici Florence, cross-cultural encounters in sixteenth-century Peru, a queer reading of the formation of the modernist canon, and contemporary black diaspora art around the Atlantic.

CAA sends print copies of The Art Bulletin to all institutional and individual members who choose it as a benefit of membership. The digital version at Taylor & Francis Online is available to all CAA individual members regardless of their print subscription choice.