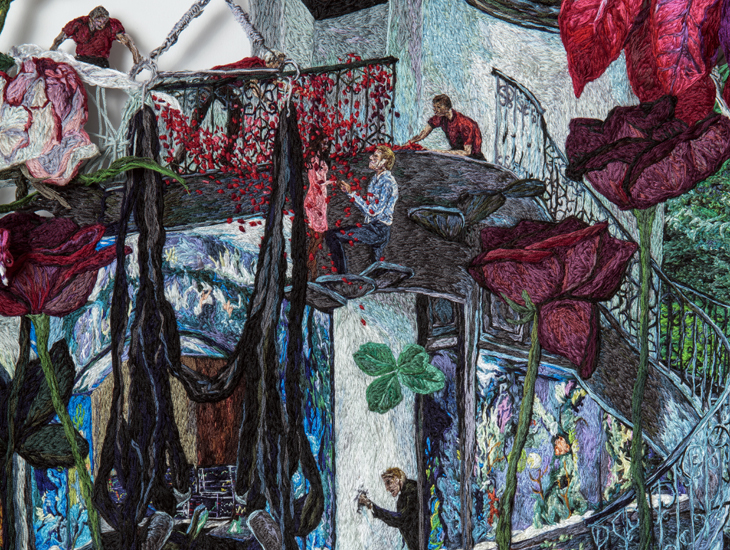 CAA’s Committee on Women in the Arts selects the best in feminist art and scholarship to share with CAA members on a monthly basis. See the picks for June below.

This retrospective exhibition brings together the large-scale film, sculpture, and sound installations created by Nathalie Djurberg and her frequent collaborator, the composer and musician Hans Berg. Djurberg’s work—by turns comical and horrifying—demands close attention: power is exchanged unevenly, humans (and animals) preen, beat, and eat one another. In this situation a feminist politics may be difficult to discern, but it is there. At the heart of Djurberg’s endeavors is the uncompromising questioning of systemic power structures—whether that be religion, the state, or gender hegemony. In The Parade (2011), Djurberg populates five synced videos with birds who flock, fight, and mate; meanwhile, on the ground, dozens of free-standing bird sculptures are lined up in a procession that recalls both biblical fable and ritualistic pageantry.

New work will accompany this presentation, and it marks the first major exhibition for the artists, who were both born in Sweden.

Access to the afterlife in the Egyptian ancient world was limited to those believed to have reproductive capacities—and astonishingly this trait was assigned solely to men. It was believed that men gestated a fetus and then, through sex, transferred it to a woman’s womb. When women died, they were depicted with male traits (red skin), and had protective spells (meant for men) incanted above their corpse and written on their coffins. This exhibition explores these gender transformative practices and more, through the choice of twenty-seven objects from the museum’s collections. As Kathlyn M. Cooney related in a recent lecture associated with the exhibition, it is not enough to consider how one of the most “totalitarian” societies treated gender and sexual difference, but to also reflect on how Egyptology is methodologically wrestling with a similar set of concerns: “Feminism in Egyptology is a strange thing, because women are encroaching to take over the field. Females are on the forefront […] What I find is often missing […] is we look for the women who had power and highlight them, in a way to make ourselves feel better about women not having power, without asking the question, more systematically, why are women excluded from power so regularly and what are the mechanisms in place?”

The centerpiece of this exhibition is the reinstallation of Barbara Bloom’s The Reign of Narcissism (1988-89), a faux period room decorated all over with the artist’s likeness. But for Bloom this was not an entrée to self-aggrandizement, but a way to work through what Mieke Bal has termed “biographism” alongside the meaning, content, and politics of design. Three tombstones, set comically in a glass vitrine, memorialize the artist before she’s dead, and chairs are upholstered with designs derived from the Bloom’s dental X-rays.

Supporting the themes of the installation (which, is also about the politics of museological display), are works by Andrea Fraser and Louise Lawler. Fraser’s Little Frank and His Carp, finds the artist sensually humping the walls of the Guggenheim Bilbao’s atrium, a response to a sycophantic audio guide. Photos by Lawler highlight the conflation of the aesthetics, display, and markets of art.

Adrian Piper’s (b. 1948) first museum retrospective in the US in a decade, and the first living artist’s show to occupy MoMA’s entire sixth floor, Adrian Piper: A Synthesis of Intuitions, 1965-2016 is a timely and moving feat for a female artist of color, even though of Piper’s caliber.

Bringing together over 290 works, including drawings, paintings, photographs, mutlimedia intallations, videos and performances, it offers a powerful and exhaustive exploration of Piper’s multifaceted contribution to contemporary art, illuminating the nuances of her Conceptualism and the intricacies of her combined critique of sexism, racism and xenophobia.

The show begins twice.The installation Vote/Emote (1990), comprising a row of voting booths where museumgoers are invited to respond to various prompts—like listing “the fears of how we might treat you”—precedes its chronological unfolding, highlighting both the centrality of the audience and emotions in the artist’s conceptual and often performative critical practice. A neo-realist self portrait, featuring a black girl with a white doll from 1966, stands out among the earliest works of the first room of the exhibition that focuses on her early experimentations with painting, poignantly marking the origins of the identity politics underpinning her work. Together they make a timely statement about the little changed state of race in America in the age of Trump, and initiate a several-hours worth familiarization with the development of Piper’s multimedia practice in the past forty years that leaves the viewer mesmerized by its profound complexity, sensitivity and acumen, as well as confronted with his/er complicity with the injustices and prejudices of the world we live in.

Bringing together 7 major works by Eija-Liisa Ahtila (b. 1959) in multiscreen configurations especially reconceived for the M Museum in Leuven, along with several series of drawings, this exhibition surveys the filmic work of the acclaimed Finnish master of cinematic installation.

Known for her experimentation with narrative story telling,  begun with unsettling human dramas at the center of human relations, in her recent works Ahtila questions the processes of perception and attribution of meaning under the light of larger cultural and existential thematics like colonialism, faith and ecological or humanitarian crisis. Encouraging us to explore how the film might enable us to narrate the very life of the planet as well as our own, a timely eco-cinematic question underpins several of her more recent works: how and with what kind of technology, drama and expressive devices can we build the image of our world in this present moment of ecological crisis?

Along with signature works produced since 2001, the exhibition includes her latest sculptural filmic masterpiece, Potentiality for Love, 2018. With a floating maternal body as its epicenter, the work questions, from a feminist posthumanist perspective, the potential for empathy and love towards other living beings, turning attention to those human emotions that could serve as a foundation for dismantling the hierarchical structures between living things, thereby engendering a turn towards non-humans and the recognition of others.

Recipient of the 2017-8 ArtFP—an open call for Brooklyn-based visual artists to exhibit at BRIC House—and the 2018 Krasner Pollock Foundation Grant, Sophia Narrett is a recent graduate from the Rhode Island School of Design, distinguished already for her mesmerizing, quite painterly and often quite tiny, embroideries and the complexities of her story telling.

Not to miss, her solo exhibition in New York at BRIC House brings together examples that thematize the power of intimacy and desire in the digital age, by casting figures culled from the Internet into lusciously embroidered scenes, in response to a world of immediate, often treacherous media. Through undulating embroidered surfaces, and edges that dissolve into loose threads or sculptural flora, Certain Magic tells a disconcerting narrative of modern longing that layers the surreal with the mundane in a manner characteristic of the artist’s story telling intricacies. While her practice exceeds the traditional parameters of embroidery, the traditional and gendered associations of the medium are crucial to its content, and feminist fragility. As put recently by the artist “Embroidery and its implicit history help specify the tone of my stories, one characterized by obsession, desire and both the freedoms and restraints of femininity.”