CAA’s Committee on Women in the Arts selects the best in feminist art and scholarship to share with CAA members on a monthly basis. See the picks for October below.

JUDY CHICAGO: THE END: A MEDITATION ON DEATH AND EXTINCTION

Judy Chicago (a feminist artist renowned for the 1970s mixed media installation, The Dinner Party), takes on her own demise in this exhibition, which includes 40 works of painted porcelain and glass and two large bronze sculptures in her hallmark bold, graphic style. Other themes captured in this exhibit are the five stages of grief and species endangered by the action or inaction of humans. Chicago’s ever-present feminist content challenges the culture that prizes youth and beauty, often over the suffering of other creatures. The Price of Love (after Kollwitz) (kiln-fired glass paint on black glass, 2015) shows two figures in a tight kneeling embrace, hands covering their faces, with the script: “Grief / DESOLATION / Sorrow / LOSS” all painted with white on black, evoking the depth of sorrow. The imagery remarkably reflecting the style of Käthe Kollwitz’s prints depicting the sorrows of those left behind after World War I, notably in people tightly embracing. This tribute by Chicago to an artist who came before her exudes the layers of meanings in her work and refreshingly acknowledges the myth of the individual artist. Beyond content, her continued commitment to feminism is also echoed through her choice of media historically associated with women’s artistic endeavors, thus exposing the socially constructed ideals of high versus decorative art, as famously done in The Dinner Party.

CALL FOR WORK: UNDEFEATED: CANVAS(S)ING THE POLITICS OF VOTER SUPPRESSION

West Virginia University takes on a contentious topic on the occasion of the 100th anniversary of the ratification of the 19th amendment to the US Constitution (granting women the right to vote), and the 55th anniversary of the Voting Rights Act of 1965 (enforcing voting rights for racial minorities) by looking at the efforts to suppress the votes of women and minorities since 1920. The WVU Libraries are calling for artwork using the template of a round button design (digital or otherwise; the Library has round canvases to disperse should artists need) around the major themes: Information/Disinformation, Access/Intimidation, Legislation/Legal Questions, Voter Fraud, and Advocacy/Action. Selected works will be on display at the University’s main campus Library from August 2020 through June 2021, and selected designs from the exhibit will be made into buttons/stickers. Located in Morgantown, artists have a great opportunity to make an impact in a local hub of arts activity in an otherwise underserved region of Appalachia.

This is the first major European retrospective of Marina Abramović, a female artist renowned for her radical performances developed since 1970s. The location of the exhibition, the final on its tour (it was first shown in 2017 at the Moderna Museet (Stockholm, Sweden), and then traveled to the Louisiana Museum of Modern Art (Humlebæk, Denmark), Henie Onstad Kunstsenter (Oslo, Norway), Bundeskunsthalle (Bonn, Germany), Fondazione Palazzo Strozzi (Florence, Italy) and the Centre of Contemporary Art ‘Znaki Czasu’ (Toruń, Poland)) is significant, as Belgrade is Abramović’s place of birth. It is also where her artistic career began.

The artist has experimented with performance art and used her body as a method and a medium, relentlessly testing its boundaries and limits and challenging social and cultural stereotypes. The exhibition reviews Abramović’s over fifty-year long career, focusing on chronological phases in her artistic practice and emphasizing her solo career from 1991 until 2017. It is a rich display of over 120 works including a range of objects, photographs, paintings, drawings, video installations, films, and archival materials. There is also a live segment presented through re-performances by local and international performers.

MONA HATOUM
REMAINS TO BE SEEN

White Cube’s exhibition captures Mona Hatoum’s new and recent installation, sculpture and work on paper. Hatoum, a Palestinian multimedia and installation artist, throughout her career has created a rich aesthetic vocabulary that often references the grid and geometry as references to systems of social control. In the exhibition the artist reflects on surveillance systems and mobilizes issues concerned with mobility, conflict, and power. Once again working with the grid, Hatoum uses industrial materials such as steel, brick, concrete, rubble, and glass—but also human hair—and collapses them into light, a suspended cube. Her visual poetics tests spatial and spherical limits and explores possibilities for formal but perhaps also social and political collapse. The theme of the grid and its negotiation overarches the works presented at the exhibition, the new installation Remains to be Seen (2019), Orbital I (2018), A Pile of Bricks (2019), Hair Mesh (2013), or Cells (2014), among others. Hatoum tests different confinements while exploring the basic form of the globe and questions the different and multiple boundaries that are imposed on society. 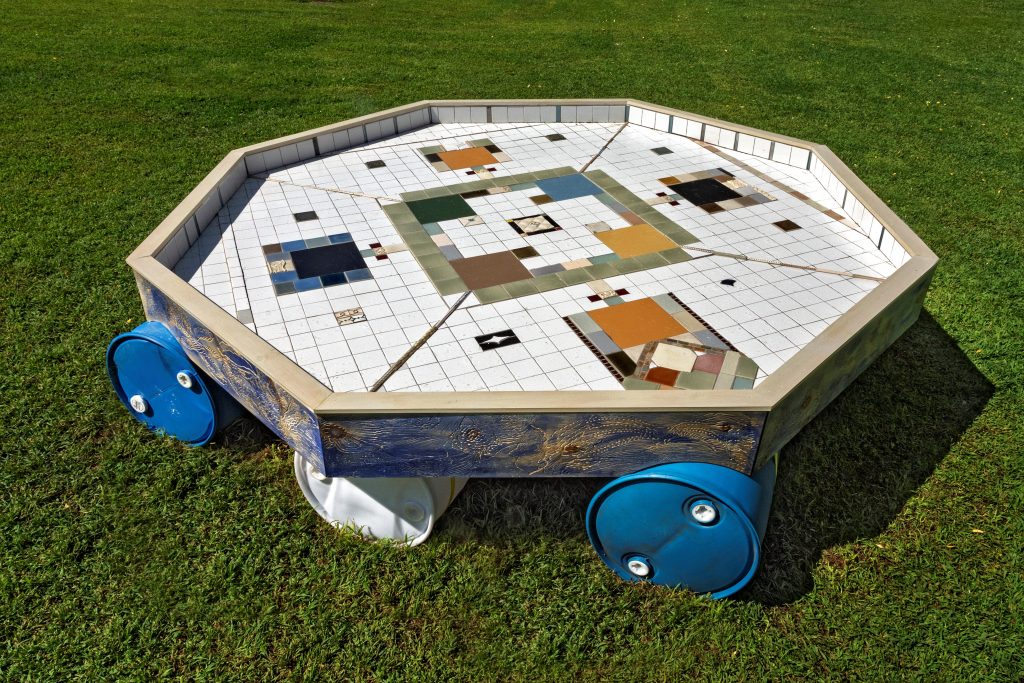 Bahar Behbahani, All water has a perfect memory.

Bahar Behbahani’s (b. 1973, Tehran, Iran) site-specific installation titled All water has a perfect memory. [the period is intentional] is settled somewhat precariously along the eight-acre wooded expanse at Wave Hill, the Bronx public garden and cultural center known for supporting dynamic contemporary art projects and exhibitions. The installation’s primary feature is the large presence of a land-bound raft constructed in the shape of an octagon, ornamented with inlaid mosaic and tile, and supported on plastic barrels. Behbahani’s structure fosters multiple discussions about the garden’s surrounding woodlands and ecosystems and engages in prescient ecological debates. At the same time, the artist’s centerpiece addresses the historical flux of migration and the restriction of geographical borders. The title aptly recalls a poetic line from writer Toni Morrison’s essay, “The Site of Memory”: “All water has a perfect memory and is forever trying to get back to where it was.” In her research-based practice, Behbahani heavily layers and builds upon her cultural and aesthetic references, and water plays a central biographical and performative role in her videos and paintings. Likewise, water functions as a primary visual and spiritual element in the Persian Gardens of Iran, the majestic walled paradises and civilian sanctuaries dating back to the sixth-century BC. Water was a foremost compositional cornerstone of these historic gardens that were organized on a fourfold plan around central pools or fountains from which flowed four channels. At Wave Hill, the manifestation of the octagonal pool, raft or “fountain,” accessorized with botanical panel designs, forges further connections to eight of the world’s contested rivers: the Euphrates, Ganges, Hudson, Karun, Mississippi, Rio Grande, and Wouri. Moreover, the octagon appears as both a sheltering and perilous object. As a stationary structure, it conjures the urgent political narratives on mobility and circulation that underline the fraught experiences of migrants and refugees. In the accompanying pamphlet, the artist explained these multifold references, stating that “the project made her think about the ‘complexity’ of building a ‘worthy raft,’ one that would be able to ‘move people, food, belongings as well as culture and memories to safety…” The project also questions broader horticultural concerns about what determines “native” flora and species. Additional technological components activate river sounds, a meditative element arranged by musician Maciek Schejbal. In the near future, the octagon will hopefully find a way to reach water, holding with it a bounty of new and old memories.