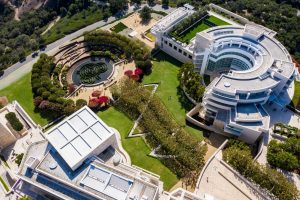 A major brush fire broke out in the early morning hours of October 28, 2019, and consumed over 600 acres to the north and west of the Getty Center. Photo courtesy the Getty Blog.

Opened in 1997, the Getty Center is a marvel of anti-fire engineering. (Getty Blog)

Are You an Aspiring Arts Critic? The New York Times Is Launching a Paid Fellowship Program

The paper has launched a one-year fellowship “to help train the next generation of fine arts critics.” (artnet News)