CAA’s Committee on Women in the Arts selects the best in feminist art and scholarship to share with CAA members on a monthly basis. See the picks for December below. 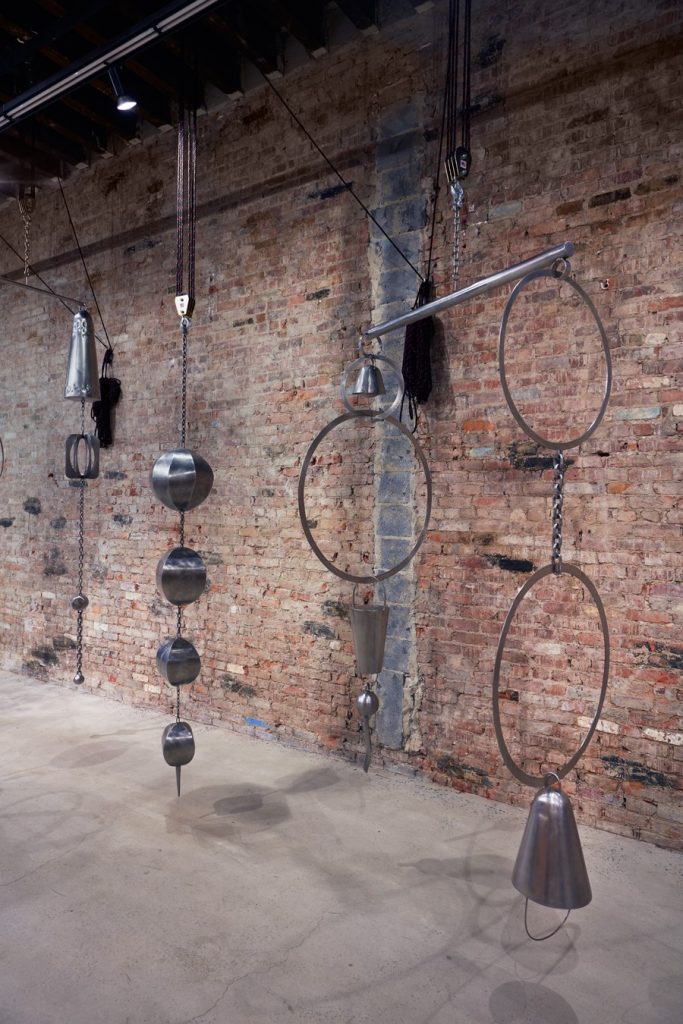 The inaugural exhibition at dieFirma, a new gallery and arts space nestled in the bustling Bowery at 32A Cooper Square, New York, celebrates the life of multidisciplinary artist Gloria Kisch (1941-2014).  An impressive presentation reveals the range and significance of Kisch’s abstract sculptures and highlights her late series of metalwork constructions called Bells (2000-2003) and Flowers (2007-13); functional furniture and objects (benches and chairs); and early hard-edge paintings from the 1960s. Also displayed are ephemera from the artist’s extensive personal archive. A large body of drawings by British artist Jane Gifford accompanies the installation. Gifford turned to Kisch’s sculptures for inspiration and produced a collection of smaller watercolors that offer a fascinating interplay and homage; the gentle conversion of three-dimensional volumetric space through line and gesture encourages a subdued reciprocity between the two artists. Kisch’s metalwork equally invites multiple readings and comparisons to likeminded artists who crossed media and arbitrarily ignored traditional fine art, craft and design hierarchies. Utilizing hand-forged stainless steel, Kisch’s statuesque Bells take on a corporeal presence—linked geometric elements vertically hang, some extenuated and stretched, others widely berthed. But it is through their mythic presence that the viewer makes connections to sculptors who gloriously filled and emptied space, recalling the mobiles of Alexander Calder and totems of David Smith, the quasi-furniture of Isamu Noguchi, the calibrated wire constructions of Ruth Asawa or the scaled modular systems of Gego. Kisch’s series of wall-mounted Flowers bring a playful pop of color with their reflective metal petals and flexible use of materials. Kisch’s own history is equally as colorful.

For Neither Love Nor Money: Women’s Invisible Labor

Using real-life work data and personal narratives, artist Sawyer Rose highlights the pervasive inequalities working women face via visualization sculpture. Rose collects data herself from female-identifying workers from across the US, and translates it into large-scale installations that visualize the number of hours women log at paid and unpaid jobs, demonstrating the physical, emotional, and practical effects of disproportionate labor loads. With the installation, she photographs the women lifting and carrying her sculpture, visually bearing the real and physical burdens. Dawline, a teaching artist, teaches elementary school and balances multiple volunteer art tutoring positions. Rose’s installation for Dawline is dozens of gold and silver leafed objects hanging from the ceiling, made of linen, cotton, rope, gold and silver leaf, metal clasps and rings, wood, stones, acrylic, and enamel. Dawline is depicted in a photo next to the installation with the stones on her lap, representing the weight of both her paid and unpaid jobs. The accompanying text includes statistics around volunteerism, disproportionately falling on women. The multi-layered, educational, and visually driven exhibit, says the artist, “may not represent your life or your particular situation, but…definitely depicts the lives of many women you know and love, women who work with you or for you…The good news, though, is that everyone can reap the benefits of a gender-equitable workforce: increased Gross Domestic Product (GDP), more profitable businesses, and healthier, happier partners and children.”

The widely recognized 1969 essay by Carol Hanisch, an American feminist activist, entitled “The Personal Is Political,” was not known in communist Poland in 1970s. And yet, many women artists, including Natalia Lach-Lachowicz, known as Natalia LL, were using their bodies and most intimate surroundings to explore what it meant to be and become a woman. In her 1972 manifesto “Transformative Attitude,” Natalia LL wrote that “Art is in the process of becoming in every instant of reality,” and that she “records common events.” Since her studies at the Academy of Fine Arts in Wrocław, Poland, and in her artistic career spanning almost 50 years, Natalia LL has been using photography and film to investigate everyday bodily activities such as sleeping, eating, or speaking. Her works engage with issues concerning the rise of consumer culture and the fetishization of objects and bodies. She is known as a pioneer of feminist avant-garde in Poland and has become one of the first Polish women artists to be influential in the international feminist art movement of 1970s. The exhibition in lokal_30 features some of the key works of the artist alongside photographs which Natalia LL sent for an exhibition in Paramedia gallery in Berlin in 1974 and which have never been displayed in Poland.

Łódź, a city in central Poland, has been cultivating its textile industry traditions since the 19th century. The International Trennial of Tapestry is the oldest and most important presentation of phenomena connected to the medium of textiles. For the first time in its history, the formula of the Triennial has been opened and artists themselves could apply to participate. It has also been enriched by the introduction of the role of the curator, Marta Kowalewska, and focus on an overarching key theme, which for the 16th edition is “Breaching Borders.” The understanding of borders is multi-layered. Artists from 21 countries in 55 selected works explore the threats and fears marking our contemporary condition, historical references, and personal stories that question the concept of borders as sources of conflict and trauma. The theme also references textiles and their place as one of liberated arts on one hand, and their structure enabling interlacing and layering of meanings and perspectives. The exhibition includes works of many significant women artists, such as Dorte Jensen, Ola Kozioł, Lucy Brown, Lisa Palm, Caroline Achaintre, Agata Borowa, Dobrosława Kowalewska, Anne Wilson or Joanna Malinowska, among others. It also features the unique work titled Your Things, a 20-meter fabric created in the Center for Foreigners in Łuków, Poland by Chechen refugees Zaira Avtaeva, Zalina Tavgereeva, Liana Borczaszvilli, Makka Visengereeva, Khava Bashanova, and Alina Malcagova, who await international protection. The work was created as part of a mini-grant of the Feminist Fund implemented in cooperation with the For the Earth Association according to a concept developed by Pamela Bożek.

Artist Margaret Jacobs couples her steel sculptures celebrating Indigenous culture with early twentieth century ironworking tools, exploring the tension and harmony between forces of nature and humans. Jacobs’ sculptures, such as Steel Medicine, depict medicinal plants with a strong aesthetic via the dark color and heavy materiality of the metal, complemented by the softness of the sinewy shadows of the sculpture on the wall, emphasizing too the resilience and fragility of nature. Jacobs, a member of the St. Regis Mohawk Tribe, created two new series, Steel Medicine and Survival Medicine, on view, especially for this exhibit. “My culture inspires me to create pieces charged with power, strength, and beauty,” writes the artist in her statement, and in turn, “I believe my work celebrates indigenous culture with a bold, powerful aesthetic.”