In Memory of Moira Roth 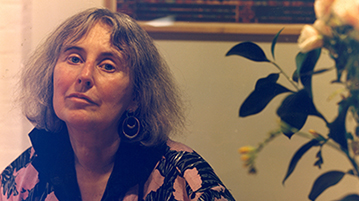 Moira Roth, one of the last of the founding generation of feminist art historians, died on June 14, 2021, at the age of 87. Famously warm, gracious, and charming, Roth was an outsized figure in progressive art history who treated internationally celebrated artists and her Mills College undergraduates with equal solicitousness and respect. Despite a perfectly preserved British accent after over fifty years in the US, she identified with outsiders, chiefly those who stood as the obverse of her own origins, e.g., African Americans, Jews, queers, Asian Americans—the women among them most of all. Persistent and profoundly subversive, she could electrify: at a conference on John Cage shortly after his death, amidst a welter of traditional academic papers, Roth simply read the day’s New York Times front page, a perfectly Cageian act that at once brilliantly distilled his aesthetic politics and echoed his repeated attempts to link his art with a larger politics of power and control.

A pioneering figure in multiple fields, Roth cofounded, with Flo Oy Wong and Betty Kano, the Asian American Women Artists Association (AAWAA) in San Francisco and wrote one of the earliest articles in queer studies in art history, her celebrated 1977 “The Aesthetic of Indifference” about the queer post–Abstract Expressionist generation of Johns, Rauschenberg, Cage, etc. That article became, for me and many others, a singular intellectual touchstone, demonstrating not only that a queer art history was possible, but that taking sexuality seriously offered up a new and powerful lens to the field. Equally precocious was her The Amazing Decade: Women and Performance Art, 1970–1980, an important archival resource published in 1983 that also anticipated the development of a new field. Roth was a scholar, a celebrated interviewer of artists, a poet, performance artist, and dinner host extraordinaire. Long after the era of Bay Area communes, friendship for her was something she took very seriously—a way of being in the world in close communion and interdependence with the like-minded, creating a coalition of mutual support and activist change.

Roth’s generosity was legendary, with students, colleagues, and artists alike. Those of us lucky enough to be invited to dinner would find a beautifully set, colorful table, always water in blue bottles, a written menu of dishes lovingly wrought from the wonders of Berkeley’s farmers’ markets, and Roth at her most wistful; indeed, dinners were often moved back in time and place to reflect her current imaginative engagements. The twinned currents of her life, friendship and scholarship, often intertwined, and artists, scholars, and students were frequent dinner guests in her Berkeley home with its laden lemon tree right by the door. Her generosity toward younger scholars knew no bounds, and she generously promoted their work to editors seeking her contribution. When she was approached about publishing a volume of her early work on the post–Abstract Expressionist generation, she asked me to contribute a critique of her early works from a queer studies perspective, knowing full well that as much as I loved her early writing, I also felt it didn’t go far enough in its queer analysis. The book that resulted from that astounding act of generosity, Difference/ Indifference: Musings on Postmodernism, Marcel Duchamp and John Cage, was couched less as a tribute to her historical import and more as a present-tense debate over politics and methods—a classically Roth move to all who knew her.

Roth was an artist in her own right, doing performances, writing short stories and poems, traveling the world to offer up criticism while exploring new national cultures. Her investigation of the world of Rachel Marker was a thinly disguised imaginative re-creation of the pre-Holocaust context of her “other” mother, Rose Hacker, a remarkable feminist politician in the UK who first entered Roth’s life as a Jewish refugee from the bombings in London and entranced her with her bold refusal to submit to gendered expectations and codes. Roth was also effectively the founder of a new performative approach to art history, stressing work done in collaboration, often across widely dispersed national boundaries. Her gift of uniting disparate communities and forging powerful connections among people who previously didn’t know one another remains in evidence today. Among the many artists with whom she collaborated, either on writing projects or performances, were Faith Ringgold, Suzanne Lacy, Carlos Villa, Pauline Oliveros, Rachel Rosenthal, and Dinh Q. Lê.

Roth received a Lifetime Achievement Award from the Women’s Caucus for Art in 1997 and a National Recognition in the Arts Award from the College Art Association in 2006. She was interviewed by Sue Heinemann for the Smithsonian Archives of American Art Elizabeth Murray Oral History project.