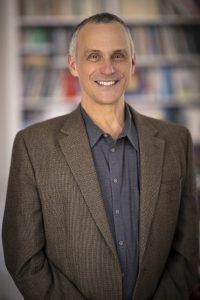 We are thrilled to announce that Michael S. Roth, President of Wesleyan University, will give the keynote address at CAA’s Convocation during the organization’s 111th Annual Conference.

Michael S. Roth ’78 became the sixteenth president of Wesleyan University in 2007, after having served as Hartley Burr Alexander Professor of Humanities at Scripps College, Associate Director of the Getty Research Institute, and President of the California College of the Arts. At Wesleyan, Roth has overseen the launch of such academic programs as the Allbritton Center for the Study of Public Life and the Shapiro Center for Writing as well as four new interdisciplinary colleges that emphasize advanced research and cohort building in the areas of the environment, film, East Asian studies, and integrative sciences. Under his leadership, Wesleyan experienced its most ambitious fundraising campaign in its history, raising more than $482 million, primarily for financial aid. Roth has undertaken several initiatives that have energized the curriculum and helped to make a Wesleyan education more affordable and accessible to students from under-represented groups, creating a supportive and diverse campus community that inspires students to achieve their personal best.

Author and curator (most notably of the exhibition Sigmund Freud: Conflict and Culture, Library of Congress, 1998–99), Roth describes his scholarly interests as centered on “how people make sense of the past.” His 2015 book Beyond the University: Why Liberal Education Matters (Yale University Press) has been a powerful tool for students, their families, faculty, and policymakers who are wrestling with the future of higher education in America. It was recognized in 2016 with the American Association of Colleges and Universities’ Frederic W. Ness award for a book that best illuminates the goals and practices of a contemporary liberal education. Roth’s newest book, Safe Enough Spaces: A Pragmatist’s Approach to Inclusion, Free Speech, and Political Correctness (Yale University Press), addresses some of the most contentious issues in American higher education, including affirmative action, safe spaces, and questions of free speech. Roth regularly publishes essays, book reviews, and commentaries in the national media and in scholarly journals. He continues to teach undergraduate courses and has offered MOOCs through Coursera, most recently, “How to Change the World.”