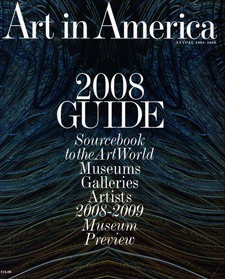 Art in America’s 2008 Annual Guide to Galleries, Museums, and Artists hit newsstands earlier this month, with museum previews for the 2008–9 season as well as a look back at notable events and people of the past year. The “People in Review” section features Yoko Ono, Robert L. Herbert, Chris Kraus, and Sylvia Sleigh as honored recipients of CAA Awards for Distinction. The awards were presented in February 2008 at the CAA Annual Conference in Dallas–Fort Worth.