Why Do Colleges Have So Much Art?

Public or private, rural or urban, college museums are tackling ambitious projects like never before, promoting academic curators—who were once part of a sleepier, insular art world—to be lead actors on the cultural stage. But not everyone agrees that school museums should compete with their mainstream counterparts or that students necessarily benefit more from having art of such magnitude as opposed to more modest collections. (Read more from the Atlantic.)

When Will We Learn?

“Twice as good” is the standard set for generations of black and brown children across America, a warning consistently administered in stern but loving tones from parental figures as dissimilar as the fictional Rowan Pope and first lady Michelle Obama. Yet in academia, all too often “twice as good” still isn’t good enough. (Read more from the Root.)

How a Sculptor Adapted to Today’s Economy

Matt Langford is a formally trained sculptor who now does finishing work in a prototype lab at GE’s additive-manufacturing facility in Cincinnati. The Atlantic spoke with him about his training as a sculptor, how he’s transitioned those skills as technology advances, and how American industries treat older workers. (Read more from the Atlantic.)

If you’re on the academic job market, you’re in the process of assembling and sending out application packages. There’s a lot of great advice out there on crafting CVs, cover letters, and other job documents. Here I want to do something different: give you a mental image of what is happening on the other side of the hiring table, so you can put yourself in the shoes of a search-committee member. (Read more from Vitae.)

If you are like me, you spend the majority of your office hours staring at the door, willing your students to walk in and use the time you set aside for their benefit. Why is it that so few of them take advantage of this time, and how can we get more of them to do so? (Read more from Inside Higher Ed.)

Art books are niche products. Hardly anyone reads them, you can’t make money with them, and anyway, there’s the internet. And yet an increasing number galleries have begun producing books. Why? (Read more from Artnet News.)

Brands matter because authors think they do. The best brands attract the best authors—a virtuous circle in which good authors strengthen brands and brands confer their aura on authors. Brands also matter to readers in direct and indirect ways, and the indirect importance has the most influence on the individuals who purchase books. (Read more from the Scholarly Kitchen.)

Between tough classes, on-campus involvement, and trying to have a social life, your college years are likely to be the most stressful time of your life so far. Maybe that’s what you went in expecting, but the statistics surrounding college students and stress are still pretty shocking. (Read more from Course Hero.)

Vanessa R. Schwartz discusses the exhibition Revolution of the Eye: Modern Art and the Birth of American Television, organized by the Jewish Museum. “Television clips, furniture, artwork, and ephemera” offer insights into the “bygone age of television,” a revolutionary moment that “included the celebratory embrace of the breakdown between art, commerce, and entertainment.” Read the full review at caa.reviews.

Liz Glass reviews Seth Price’s book Fuck Seth Price, a “self-declared novel” though it “is not a novel in any recognizable sense . . . but rather a somewhat schizophrenic deluge of thoughts on art—and particularly painting—and the future of the artist in the age of the ‘digital.’” Although the “universalizing tone becomes tiresome,” his approach to the novel “is full of contemplation, contradiction, and contrivance.” Read the full review at caa.reviews.

Rachel Silberstein visits China: Through the Looking Glass, an exhibition curated by Andrew Bolton at the Metropolitan Museum of Art. An “exploration of how Chinese dress and aesthetics have influenced the Western fashion world,” the show “innovates in two primary respects,” but does not “allow the audience to explore fashion as a more complex and historical object.” Read the full review at caa.reviews.

Caa.reviews publishes over 150 reviews each year. Founded in 1998, the site publishes timely scholarly and critical reviews of studies and projects in all areas and periods of art history, visual studies, and the fine arts, providing peer review for the disciplines served by the College Art Association. Publications and projects reviewed include books, articles, exhibitions, conferences, digital scholarship, and other works as appropriate. Read more reviews at caa.reviews.

Art Journal Open has recently published new content. Below are the introductory sentences of an essay, an annotated bibliography, and an artist’s project.

Artist Kate Costello has created a unique animation of her limited edition book, P&P, for Art Journal Open. Costello has taken P&P—which can be read as a compendium of process images (sketches, notes)—full circle by animating and translating the analogue process of paging through the book into a digital form. This project also includes an excerpt from “The Space of the Image” by curator Rita Gonzalez, and an introduction by Art Journal Open’s web editor, Gloria Sutton. Read the full article on Art Journal Open.

“no water, Athens, Greece, 2015: Twenty-four hours with nothing to eat or drink, only smelling the jasmine”

Penelope Vlassopoulou began her Metamorphosis series in her home city of Athens. The series evolved in multidisciplinary dialogue with diverse urban environments including Berlin, Belgrade, and Chicago. In March 2015, Metamorphosis returned to its point of origin with no water tracing a link between Greece’s historical past and the country’s current predicament. Read the full article on Art Journal Open.

In 1968, while demonstrating students occupied university buildings less than a mile away, the Italian artist Mario Merz hung a handful of neon lights bent into the numerals 1, 1, 2, 3, and 5 above the kitchen stove in his home on Via Santa Giulia in Turin. It wasn’t yet an artwork, just something to think about in the place where he and his wife, fellow artist Marisa Merz, gathered to talk with each other and with friends. Read the full article on Art Journal Open.

Each week CAA News summarizes eight articles, published around the web, that CAA members may find interesting and useful in their professional and creative lives.

Artificial Intelligence as a Bridge for Art and Reality

How to get people interested in art? How to engage millennials? How to expose permanent-collection works that sit in storage? These are questions art museums constantly ponder. Recently, Tate Britain asked another one: How can artificial intelligence help? (Read more from the New York Times.)

An MIT task force has released a preliminary report featuring proposals to help the school’s library system become an “open global platform” enabling the discovery, use, and stewardship of information and knowledge for future generations. The report contains recommendations to develop a global library for a global university while strengthening the library’s relationship with local academic and public communities. (Read more from MIT News.)

Help Desk: Breaking Up Is Hard to Do

Simple in theory, painful in practice—but the way to break up a collaborative partnership is the same as for a romantic one: with as much honesty and compassion as you can muster. If you’re splitting up to pursue solo projects, then you have to say so; if you’ve found a new collaborator, you’ll need to announce it. (Read more from Daily Serving.)

Why Are Some Artists Remembered More Than Others?

Every year, thousands of art-school graduates across the globe embark on their careers in the hopes of becoming professional artists. With the influx of new talent, older generations inevitably make way. But why are some artists remembered and revered, while others remain forgotten? (Read more from Artnet News.)

How Important Is Art History in Today’s Market?

“Rembrandt weeps.” “The humanities are under assault.” “An educational disaster.” These were just a few of the howls of online dismay that followed the announcement that AQA, the last examining board offering History of Art as an A-level test to 16- to 18-year-olds in England, Wales, and Northern Ireland, would be dropping the subject. The small number of students taking the subject and its wide range of topics had made it difficult to compare exam performance, the board explained. (Read more from the New York Times.)

The Remix Wars: Originality in the Age of Digital Reproduction

Is there nothing new under the sun? In the first of a series of articles, New Atlas will examine how twenty-first-century digital technology has given artists a set of tools that has dismantled traditional definitions of originality and is challenging the notions of copyright that dominated much of the twentieth century. (Read more from New Atlas.)

A veteran organizer of cutting-edge exhibitions, Laura Hoptman built her career in part through her insistence on championing the medium, even—or perhaps especially—through its perennial periods of unpopularity and critical disdain. This has earned her both accolades and scorn, but her track record of introducing vital contemporary painters to American audiences largely speaks for itself. (Read more from Artspace.) 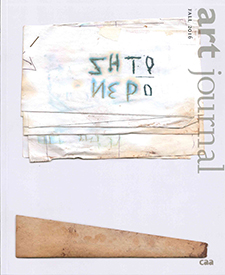 The Art Journal Editorial Board invites nominations and self-nominations for the position of web editor for the term of July 1, 2017–June 30, 2020. A candidate may be an artist, art historian, critic, educator, curator, or other art professional; institutional affiliation is not required. Art Journal Open is an independently edited companion of the quarterly Art Journal; it is likewise devoted to twentieth- and twenty-first-century art and visual culture. Content is published on a continual, rolling basis.

Working with the editorial board, the web editor is responsible for commissioning all content for the Art Journal Open website. He or she solicits or commissions projects, texts, images, and time-based content by artists and other authors, and determines the appropriate scope and format of each project. In consultation with the editor-in-chief and editorial board, the web editor determines which pieces should undergo peer review and subsequent revision before acceptance for publication. The web editor also works with authors and a CAA staff editor on the development and preparation of materials for publication. The editorial board expects that a major portion of the website projects will be by artists or geared to the concerns of artists and that the web editor will endeavor to give voice to under-represented perspectives. Qualifications for the position include a broad knowledge of current art, the ability to work closely with artists in a wide variety of practices, and experience in developing content for an arts website. The three-year term includes membership on the Art Journal Editorial Board and an annual honorarium, paid quarterly.

The web editor attends the three meetings each year of the Art Journal Editorial Board—held by teleconference or in New York in the spring and fall, and at the CAA Annual Conference in February—and submits an annual report to CAA’s Board of Directors.

Candidates must be current CAA members and should not serve concurrently on the editorial board of a competitive journal or on another CAA editorial board or committee. The web editor may not publish her or his own work in the journal or on the website during the term of service. Nominators should ascertain a nominee’s willingness to serve before submitting a name; self-nominations are also welcome. Please send a letter describing your interest in and qualifications for the position, a CV, and at least one letter of recommendation to: Art Journal Web Editor Search, College Art Association, 50 Broadway, 21st Floor, New York, NY 10004; or email the documents to Joe Hannan, CAA editorial director. Deadline: January 9, 2017; finalists will be interviewed on February 15 in New York or via Skype.