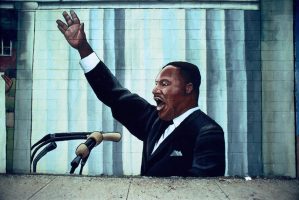 The gift appears to be the largest by far to a philosophy department anywhere in the world. (New York Times)

The Google Arts & Culture app tapped into the zeitgeist over the weekend, allowing social media users to share their doppelgangers from art history. (NPR)

Why These 6 Artists Destroyed Their Own Art

Six stories of artists who chose to destroy their own art, including Michelangelo, Monet, and Georgia O’Keeffe. (Artsy)

Since the 1970s, Camilo José Vergara has documented hand-painted images of the civil rights leader across the US. (Citylab)

Helen Maudsley on How to Read Art: “Learn to Do What the Picture Tells You”

After a career spanning seven decades, the 90-year-old Australian artist expects her audience to put in an effort. (The Guardian)