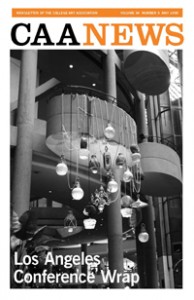 The May issue of CAA News has just been published. All individual and institutional members will receive it in the mail; you can also download a PDF of the issue now, reformatted to better fit your screen.

In the issue, CAA President Paul Jaskot and Director of Programs Emmanuel Lemakis sum up highlights from the 2009 Annual Conference in Los Angeles, and CAA Board Member Andrea Kirsh writes about her experiences at this year’s Arts Advocacy Day and Humanities Advocacy Day.

The May newsletter also includes instructions for proposing a session for the 2011 Annual Conference in New York—CAA’s centennial year. Please read the guidelines carefully before the submission process begins on June 16, 2009. Deadline: September 1, 2009.

Also published are calls for texts on “the contemporary” for Art Journal and for participation on CAA’s Professional Interests, Practices, and Standards Committees—plus the latest news from CAA’s affiliated societies and listings of solo exhibitions, books published, and exhibitions curated by CAA members.

Andrea Kirsh, an independent art historian based in Philadelphia, Pennsylvania, and a member of the CAA Board of Directors, was one of several CAA delegates who attended Humanities Advocacy Day and Arts Advocacy Day, both of which took place in March 2009 in Washington, DC.

Photo: The Grammy-nominated singer-songwriter Josh Groban (center) advocates for the arts with CAA board member Judith Thorpe (left) and Jean Miller at the Congressional Breakfast during Arts Advocacy Day

President Barrack Obama has released his budget recommendations for fiscal year 2010, which includes $161 million in funding for the National Endowment for the Arts—$11 million over the previous year’s budget and the largest increase in fifteen years. Obama’s administration also requested $38.16 million for the Arts in Education program at the US Department of Education.

CAA encourages you to contact your legislators to voice your support for these increases in arts and cultural funding through the Arts Action Center, sponsored by Americans for the Arts. You can use or modify existing letter templates to tell Congress to support Arts in Education and the National Endowment for the Arts.

Filed under: Advocacy — Tags: Advocacy Resources, Government Funding for the Arts and Humanities —

Call for Art Journal Texts on “the Contemporary”

During my tenure as editor-in-chief of Art Journal, I would like to publish a wide-ranging series that assesses contemporary art—its making, exhibition, criticism, history, and social uses. This series could include the kind of state-of-the-field essays that have traditionally been written about historical areas of study for The Art Bulletin. It could also mean more focused historiographic subjects, such as the evolution of “the contemporary” or the rise and fall of postmodernism. Or theoretical discussions of, for example, the relationships between the modern and the contemporary (questions of periodization being of special interest), or more speculative considerations of the changing role of contemporary art in current economic, technological, and social conditions.

I welcome approaches that are ambitious and generalizing, but since “the contemporary” is not really a single unified disciplinary object, I am also seeking writing that is partisan and partial, local and medium-specific. While one person might approach postmodernism from a historical perspective, as an object in the past, another might argue for its continuing validity under current conditions. Different authors might investigate the social meaning of “the contemporary” as opposed to the modern in particular countries at particular moments (the US at midcentury, China today), or for particular institutions, such as the museum, biennial exhibition, or university/college course.

I would like to hear from curators, teachers, critics, and artists about their own concrete experiences in relation to these large, abstract questions. I am interested not only in a wide range of topics, but also a diversity of approaches to those topics: art criticism, discussions, shorter polemical essays, and artists’ projects are all possibilities in addition to the scholarly article.