Each week CAA News summarizes eight articles, published around the web, that CAA members may find interesting and useful in their professional and creative lives.

How Do Artists Get Gallery Representation?

While it’s possible to go it alone, it’s hard to understate the importance of a supportive, dedicated gallery to your career. The right gallerist doubles as a sounding board while you develop your work, a public platform for your practice, and a source of income. (Read more from Artsy.)

For young artists fresh from art school or an MFA program, studio space may be prohibitively expensive, and leaving the nurturing bubble of school is daunting. Residencies can fill that gap—if these up-and-coming artists know which ones to apply for. (Read more from Artnet News.)

If we want to make a dent in the problem of digital distractions in class, we must begin by clarifying the policies we have created and the reasons behind them. Those reasons might look different from teacher to teacher. (Read more from the Chronicle of Higher Education.)

Another Year on the Academic Job Market

Perhaps the summer months can provide you some time for concentrated focus on your next—and hopefully last—round on the market. Here is one person’s perspective on what you might do between now and the next academic hiring season. (Read more from Inside Higher Ed.)

Your Syllabus Doesn’t Have to Look Like a Contract

Zac Wendler was tired of the same routine at the beginning of every semester. He would hand out his syllabus—five or so pages of text—and students would glance at it and wait for him to walk them through it. Then for the rest of the semester, they would ask him questions that could be easily answered if they had read the syllabus. (Read more from Vitae.)

An exhibition of Dana Schutz’s recent work opened at the Institute of Contemporary Art in Boston, and it won’t be without controversy. Protestors released an open letter expressing their disappointment that the museum is honoring an artist they believe should instead be held accountable for her portrait of Emmett Till, Open Casket. (Read more from Hyperallergic.)

Why We Shouldn’t Punish Small Museums for Deaccessioning

AAM and AAMD contend that their member institutions should only deaccession artworks in their holdings for the express purpose of either acquiring new works or, in the AAM’s case, caring for existing works. It’s an ideologically pure, dependably crowd-pleasing position to take. (Read more from Artnet News.)

Look Up, See a Masterpiece

You’re strolling around an art museum, and one painting catches your eye. Intrigued and mesmerized, you think to yourself, “Now that’s a masterpiece!” Many intangibles go into that judgment, but new research suggests it is partially inspired by one easily measured variable: the painting’s placement on the wall. (Read more from Pacific Standard.) 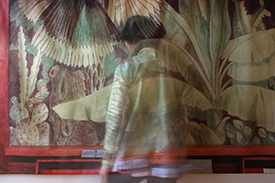 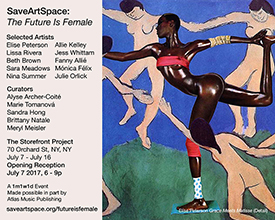